This time around, my wonderful uncle volunteered to create a book cover for my newest series, and I couldn’t be happier with the results. Here is the evolution of the cover.

After writing the blog post Should have listened to my teachers, where I lamented about letting the bit of knowledge of Adobe products go to waste, my uncle volunteered to do a book cover. With my mom’s encouragement, I accepted the offer. 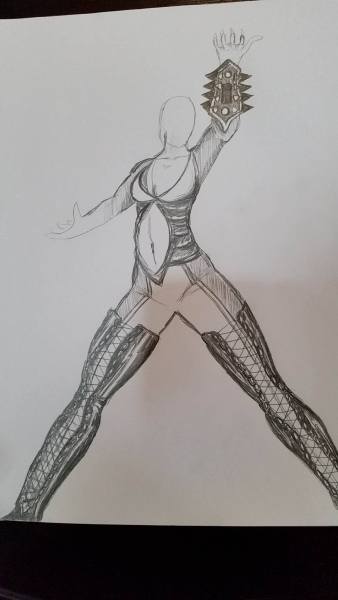 After sending a description of the vision for the book cover, the first draft came in. It was a little too much like a fantasy witch concept. Her wide-legged power stance made my face crinkle in disgust. The braver on her arm had me laughing, but I overall liked the outfit. I worried that I would come off sounding ungrateful, but my uncle was very receptive to my critiques. After some quick online searches for reference photos that would help give better direction, my uncle was off to the drawing board. 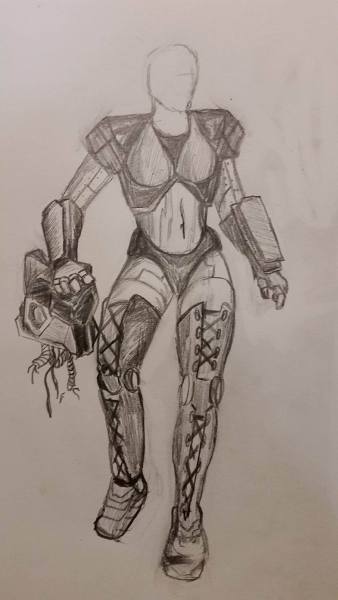 Getting closer, but them shoulders!

The second draft was much more in line with the vision description and closer to the Cyberpunk feel of R9. Still, there were a few things I didn’t like. The shoulders made the character feel too boxy and military like. It almost appeared as more a battlesuit, like Iron Man. I wanted the character to look more human. Putting aside my worry for coming off unhappy with the progress, I gave 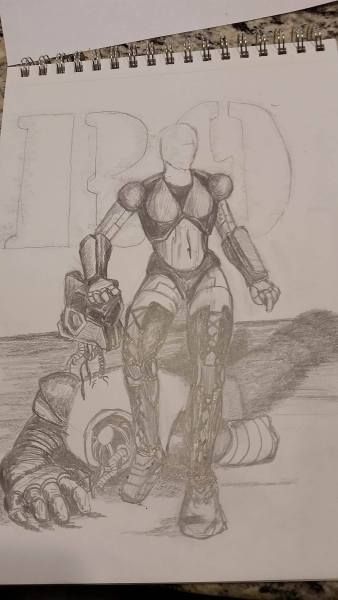 Now we got it!

feedback. It was around the second or third feedback that my uncle said it had been a while since he’d done this kind of work, and if I was unhappy with the final result I didn’t have to use it.

I panicked a little, afraid I was too critical or pushing too hard. Until the third draft came in. Rounded shoulders gave the character a softer and slightly more feminine feeling. The dead robot at her feet put the biggest smile on my face. I could just imagine the fight that took place. Since the head still hadn’t been filled in, I wasn’t sure if my uncle would do a helmet for the character. I didn’t like the idea either so more feedback was sent with a lot of thank yous at the end. 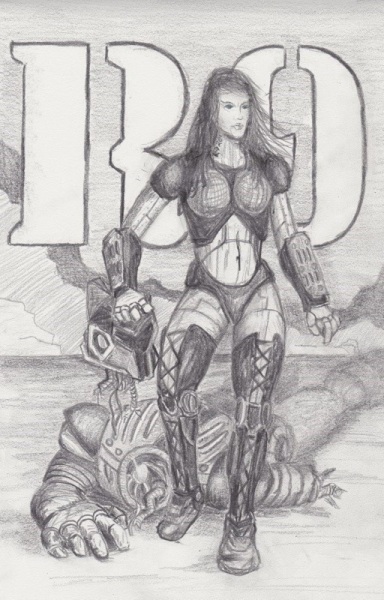 His final draft placed details into the character’s face, a background, and more shading, and the series title strategically placed. Everything in pencil and scanned for me to use. Unfortunately, he couldn’t transfer it to a digital form beyond the scanned copy, but I didn’t mind.

After looking over his final draft for a few days, I worried that it wouldn’t appear well on Wattpad or through my social media accounts. This cover art would be used to promote both the new series and my Patreon. More importantly, I really wanted my uncle’s impressive work to shine. He put a lot of effort into this and took my feedback with grace, so I want his 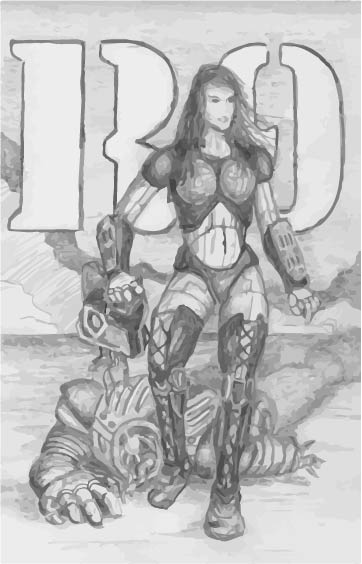 work to show well. Using my limited Adobe Illustrator skills, I pulled his final sketch and used live trace’s shades of gray. Some of the little details like the nose and the serial number on the robot’s neck disappeared, but the rest of it looks very polished.

The book cover is very close to what I envisioned. Even the character design too. Normally I shy away from asking family and friends for help, mostly because I don’t want to damage our relationships or impose on their busy lives. I am really grateful that my uncle took the time to do this. I absolutely love the cover design and hope lots of people that see it will comment good things. It took a lot of hard work. His courage to show his creative process and accept critiques along the way is very admirable. I hope he continues to draw more and share his talent with the world. I’m his number three fan, my mom’s got the second spot, and the first spot always goes to his wife.

Sign up on my Patreon to get a first look at new chapters for R9.

The Soul of a Rabbit: Final Chapter

The Soul Of A Rabbit: Chapter Four

The Soul of a Rabbit: The third Chapter is up!